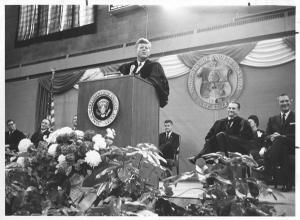 On September 25, 1963, President John F. Kennedy visited the University of North Dakota, a rarity for a sitting president and the University. The visit only lasted an hour, but that was enough to make the President’s stop memorable for those who attended, and notable in the history of the University.

Dr. Crystal Alberts, Assistant Professor in the Department of English, worked with the Library’s Special Collections Department to create a digital archive of the JFK’s visit to UND. “It’s important for those that want to do scholarship on Kennedy,” said Alberts. “These files were never digitized by the Kennedy library, so having them accessible in this way is a contribution to scholarship.”

Alberts led a group of students in her digital humanities course to create the electronic transcript of Kennedy’s speech from the audio files in Special Collections.

Kennedy’s trip was part of a five-day journey across the United States to support a national discussion about new uses and technologies for the country’s abundant resources. Kennedy cited the upper Missouri Valley, and specifically the Garrison Dam which created Lake Sakakawea, as an important “conservation landmark.”

Begun in 1946, the Garrison Dam was constructed by the Army Corps of Engineers and is the fifth largest earthen dam in the world. In the 1930’s, only three out of every hundred farms in North Dakota were lit by electricity. With a nameplate capacity of over 500 megawatts, the hydropower turbines still generate electricity for much of the region.

Kennedy’s visit came just 60 days before he was killed while visiting Dallas, Texas. UND awarded Kennedy an honorary Doctor of Laws before he spoke.

Of Note: In 1963, the city of Grand Forks had a population of a little over 30,000, yet the crowd filling the Fieldhouse (renamed Hyslop Sports Center) was estimated at 20,000.